Gen Z and Millennials share what 9/11 means to them

As the 20th anniversary of September 11, 2001 approaches, Cassandra explored what this pivotal event means to young people and how their perspectives differ by generation. We asked Gen Z and Millennials to share what impact this event has had on their life, how it influenced the identity of their generation as a whole, and what this means for their and the country’s future. Read below to hear straight from the young members of our Cassandra Collective. 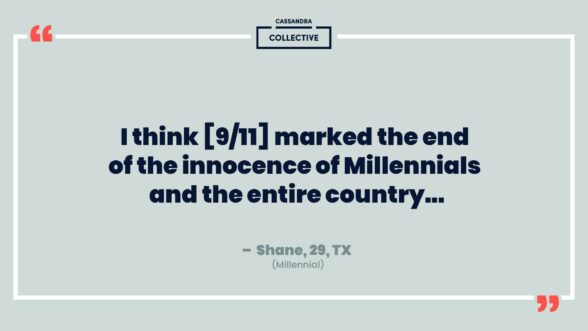 A DEFINING MOMENT FOR MANY MILLENNIALS

Many Millennials watched the day unfold while at school and, along with the entire country, did not fully understand what was happening. The intensity of the imagery and news coverage made this an immediately defining event for them. However, the majority of Gen Z was not yet born and those that were, were only toddlers so most learned about it in school- more as part of the nation’s history than their own. 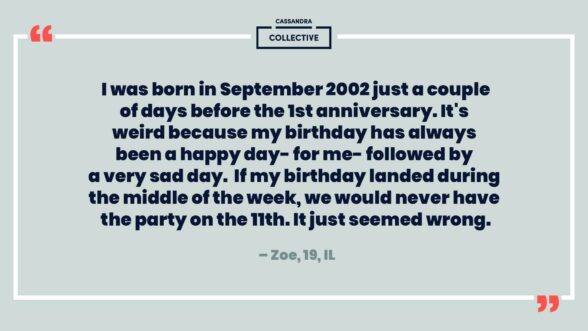 WHETHER ALIVE IN 2001 OR NOT, BOTH GENERATIONS EXPERIENCE THE LONG-TERM SADNESS CAUSED BY 9/11

The impact of that day continues to terrorize the mental health of Americans, even of those who were small kids or not even born yet. 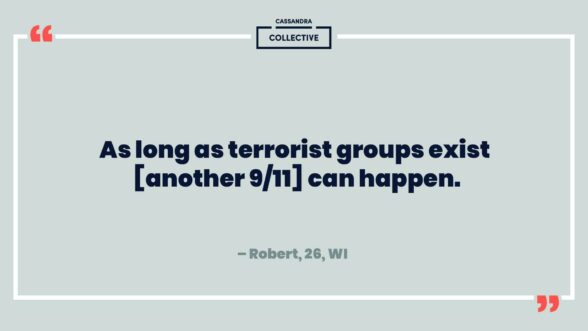 YOUNG PEOPLE FEEL THAT TERRORISM IS PART OF SOCIETY AND THAT MORE ATTACKS ON U.S. SOIL ARE POSSIBLE

Before 9/11, young Americans thought that attacks like these were a thing of the past or a thing that happened elsewhere. However, now despite multiple safety measures enacted, young people feel that another terrorist attack on American soil is a possibility.

Previous: THIS WEEK IN VIRAL NEWS Next: ATHLETES COMPETE FOR CRYPTO